Many still find it shocking, but there is a real battle underway in America over whether or not schools must let biological males who claim to be female use women’s restrooms and locker rooms at school.

Members of the Obama administration are pushing very hard to force schools to change their restroom and locker room policies, but as John Stonestreet at the Chuck Colson Center for Christian Worldview and as attorneys from the Alliance Defending Freedom both note, schools can–and have–successfully defeat this kind of bullying from the federal government.

Many parents wonder if they can do anything to stem this tide. After all, can you stop the federal government?

The Alliance Defending Freedom’s answer is a resounding “yes!”

Speaking recently on Moody Radio, the ADF’s Matt Sharp said that “If you look at what the [legal] precedent says, and what the most recent courts looking at this issue have found,” it becomes clear that “schools can have these separate facilities” for boys and girls.

END_OF_DOCUMENT_TOKEN_TO_BE_REPLACED

We are continuing our series highlighting special material our friends at Focus on the Family have provided for your family and your church.

Today we want to share two guides Focus on the Family has released on teaching your kids about homosexuality and gender confusion.

These guides are designed to equip you as a parent. You can download these resources below or from our “Resources For Your Church and Family” page. 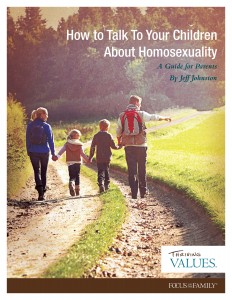 How to Talk to Your Kids About Homosexuality, by Jeff Johnston. 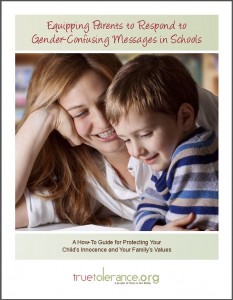 Equipping Parents to Respond to Gender-Confusing Messages in Schools, by TrueTolerance.org.

END_OF_DOCUMENT_TOKEN_TO_BE_REPLACED 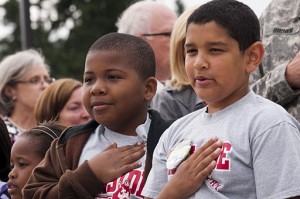 Teachers in one Nebraska school district have been instructed to stop using gender-specific language when addressing students.

According to National Review Online, teachers at the Lincoln Public Schools have been told that phrases like “boys and girls” are not “gender-inclusive” and should not be used in the classroom.

So what, you might ask, are teachers to call their students? The training handout says, “Create classroom names and then ask all of the ‘purple penguins’ to meet on the rug.”

What is most striking about the material, however, is its instruction that teachers literally should be intolerant of opposing views. The handout reads,

“Be intolerant of openly hostile attitudes or references towards others EVERY TIME you hear or observe them, but also use these as teachable moments. Take the opportunity to push the individual on their statements about gender. Being punitive may stop the behavior, at least in your presence. Being instructive may stop it entirely.”

But just a paragraph or two later, the material states,

“Help students recognize ‘all or nothing’ language by helping them understand the difference between patterns and rules. Teach them phrases like ‘That may be true for some people, but not all people,’ or ‘frequently, but not always,’ or ‘more common and less common.’ Avoid using ‘normal’ to define any behaviors.”