Video: Did Jesus Ever Talk About Homosexuality?

What would you say if someone tried to argue that homosexuality is OK, because Jesus never condemned it?

Our friends at the Colson Center have put together a short video addressing this argument. Check it out below.

END_OF_DOCUMENT_TOKEN_TO_BE_REPLACED

Why Some Christians Embrace LGBT “Theology” 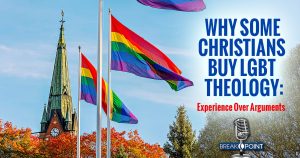 END_OF_DOCUMENT_TOKEN_TO_BE_REPLACED

A viral video with more than 2.2 million views has been making the rounds on the Internet. It tells the testimony of Emily Thomes — a young woman who left her lesbian lifestyle after coming to Christ.

You can watch this powerful video below.

"It's not gay to straight. It's lost to saved."

Thomes boldly outlines her conversion experience. She also very succinctly captures the gospel and what it means to repent from sin and accept Christ.

Needless to say, her testimony has met with criticism. The Huffington Post, Teen Vogue, The Independent, and others all have penned columns decrying the video. But as Eric Metaxas at Breakpoint recently pointed out, columns like these are based on a lie,

The central lie of the LGBT movement and the sexual revolution is that our sin and our desire for it are our identity — even something in which to take pride. But the good news of Christianity is that in Jesus, we can have a new identity. We need no longer [have to] be enslaved to our fallen passions. We were made for something better.