Arkansas Ranks 30th in Nation for Number of Abortions in 2008

The Center for Disease Control has released statistics on abortion in America for the year 2008. Out of 45 states and the District of Columbia, Arkansas ranked 30, with 4,781 abortions performed. Five states, California, Florida, Maryland, New Hampshire, and Wyoming, could not be included in the CDC’s figures for various reasons.

Here is a list of all 45 states surveyed, taken from the CDC’s latest report (Note: These numbers are approximated based on portions of the CDC’s report; totals provided by the CDC for each state are inconsistent throughout the report because of different reporting methods used by different states; by some estimations, Arkansas may have had as many as 5,000 abortions performed, 15% of which were on out-of-state residents). END_OF_DOCUMENT_TOKEN_TO_BE_REPLACED

END_OF_DOCUMENT_TOKEN_TO_BE_REPLACED

Ninety-one percent. That’s the percentage of abortions Planned Parenthood performs on all pregnant women it sees. LifeNews.com reports on this staggering number here.

END_OF_DOCUMENT_TOKEN_TO_BE_REPLACED

The Center for Disease Control has released abortion statistics for 2008. It takes the CDC a fair amount of time to collect abortion statistics, nationwide, and publish their findings, and these numbers are not 100% reliable, considering that states like California and New Hampshire did not report any abortion numbers to the CDC from the years 1999-2008, and some states, like Alaska, Louisiana, Maryland, Oklahoma, and West Virginia, failed to report their numbers during some of the years from 1999 – 2008. All things considered, however, the CDC provides one of the best snapshots of abortion trends in America (if nothing else it tells us what is happening in 43 out of 50 states over the course of a decade). 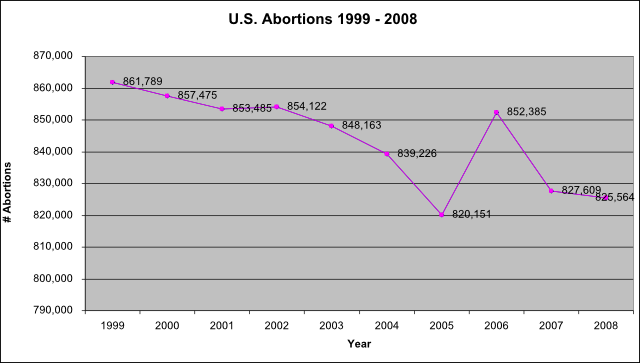