Something Remarkable Happened 104 Years Ago

On December 24, 1914, something remarkable happened: Allied and German soldiers celebrated Christmas together.

In America today World War I is overshadowed in the history textbooks by World War II. But 104 years ago Europe was locked in arguably the deadliest and most destructive conflict in human history. From the trenches encircled with barbed wire to the gas clouds and artillery pieces, World War I was unlike anything people had ever known.

On Christmas Eve 1914 both sides were quietly celebrating in their respective trenches. Gradually German and British soldiers began singing carols and shouting Christmas greetings from their lines. Then a few crossed No-Man’s Land with small gifts.

Up and down the Western Front, soldiers gradually came out of their bunkers to meet one another for one of the oddest Christmas celebrations that probably ever has been.

The event has gone down in history as “The Christmas Truce of 1914.” Unarmed soldiers at war with one another sang songs, exchanged food, and played soccer.

Today there are some who say the peace and goodwill of the Christmas Truce of 1914 gives them hope for the future of mankind. But I think if we want to find true hope, peace, and goodwill we have to look further back, to a manger in Bethlehem more than 2,000 years ago.

As we look forward to Christmas, I hope you and your loved ones know the true peace of Christ this season.

P.S. If you are thinking about supporting Family Council and the Education Alliance before the end of the year, please know that you can give securely online via our website at FamilyCouncil.org. Thank you for your support. END_OF_DOCUMENT_TOKEN_TO_BE_REPLACED 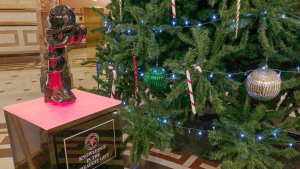 Recently city officials in Ohio opted to remove a Ten Commandments monument and Nativity scene from public property following complaints from the Freedom From Religion Foundation.

According to different news sources, the displays were moved to a church’s property nearby after the Wisconsin-based atheist group threatened to sue the City of Dover, Ohio.

Meanwhile, in Illinois state officials agreed to let the Satanic Temple install a temporary monument in its capitol rotunda alongside Christmas trees and Hanukkah decorations.

The “Snaketivity,” as it is called, features a human hand holding an apple with a snake coiled around it. Beneath the statue read the words, “Knowledge Is The Greatest Gift.”

Illinois claims it must allow the statue in its rotunda under the Bill of Rights, writing,

“The State of Illinois is required by the First Amendment of the United States Constitution to allow temporary, public displays in the state capitol so long as these displays are not paid for by taxpayer dollars. Because the first floor of the Capitol Rotunda is a public place, state officials cannot legally censor the content of speech or displays. The United States Supreme Court has held that public officials may legally impose reasonable time, place and manner restrictions regarding displays and speeches, but no regulation can be based on the content of the speech.”

Illinois also allowed the Freedom From Religion Foundation to place a sign in the rotunda reading,

At this season of THE WINTER SOLSTICE may reason prevail. There are no gods, no devils, no angels, no heaven or hell. There is only our natural world. Religion is but myth and superstition that hardens hearts and enslaves minds.

Courts have ruled time and again that states, cities, and counties can put up Christmas decorations. Christmas is a time-honored federal holiday as well as a religious one, and celebrating it doesn’t run afoul of the U.S. Constitution.

Likewise, Illinois is free to set limitations on the types of displays it allows in its capitol rotunda. It could restrict permissible displays to those celebrating federal holidays or even certain winter holidays. It isn’t obligated to allow a satanic statue next to a Christmas tree.

Courts have ruled against efforts to force these sorts of anti-Christmas decorations on states in the past. In fact in 2012 a three-judge panel on the Sixth Circuit Court of Appeals unanimously ruled that Michigan did not have to allow a sign in its capitol rotunda that was virtually identical to the sign the Freedom From Religion Foundation placed in Illinois’.

Bottom line: There’s no need for officials to worry when it comes to celebrating Christmas.

END_OF_DOCUMENT_TOKEN_TO_BE_REPLACED

The American Family Association has released its annual list of retailers who censor Christmas as well as a list of those who embrace the Christmas celebration.