According to the Associated Press, Washington County election officials in Arkansas will continue using churches as polling sites despite complaints from an atheist group.

The Freedom From Religion Foundation reportedly sent a letter to the election commission discouraging the commission from using churches as polling sites on Election Day.

However, when it’s all said and done, there is no constitutional problem with letting a church serve as a polling site–and as the AP notes, election commissioners have struggled in the past to find enough polling locations for elections.

You can read more here.

END_OF_DOCUMENT_TOKEN_TO_BE_REPLACED 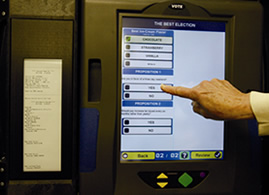 A few of you may have seen stories circulating late last week and this week about problems with electronic voting machines in Arkansas.

According to KARK news, at least one person who voted early reported that when she used the touchscreen voting machine to cast her ballot, the machine misread her vote; instead of marking the candidates she selected, the machine marked the candidates’ opponents. In this particular case, KARK writes, the woman voted for several Republicans, but the machine recorded the votes as being for Democrats.

According to election officials, electronic voting machines have to be calibrated in order for the touchscreens to work properly. As the machines are used over and over again, those calibrations can change and the machines begin to malfunction.

Review Your Vote Before Casting It

The lesson here is regardless of whether you are using a paper ballot or an electronic one, always review your ballot carefully before you submit your vote.

According to the Secretary of State’s website, electronic voting machines offer two ways to review your ballot before you submit it. The first is on a “Review” screen; when you are done marking candidates, you simply click “Review” and review your vote in much the same way you might review a purchase on a website before actually submitting your purchase.

If you spot a mistake, follow the instructions on the screen to correct it or ask a poll worker for help. And after you’ve corrected your mistake, review your ballot again–just to make sure the machine accurately recorded your correction.

Reviewing your ballot is simply another part of voting responsibly. If you spot a problem with a ballot or if you think an electronic voting machine may be malfunctioning, notify a poll worker immediately.

Update: KATV reported last night that Pulaski County has received about a dozen of complaints of “vote flipping,” with votes cast for one candidate being recorded for the candidate’s opponent. Similar reports have come out of Lonoke County and Franklin County. Election officials are recalibrating voting machines daily and encouraging every voter who uses the machines to verify their ballot before submitting.

END_OF_DOCUMENT_TOKEN_TO_BE_REPLACED

When it comes of elections, candidates usually get most of the attention. However, besides picking their leaders, Arkansas voters also get to make their own laws via ballot issues.

Ballot issues are proposed laws and constitutional amendments that voters decide, collectively, to adopt or reject. In Arkansas, ballot issues can be referred to the people by the legislature or by a petition drive.

As of this writing, five ballot issues are slated to be voted on this November. To the best of our ability, we have summarized the proposed ballot issues to give voters as clear a picture as possible of what each proposal would do, if passed.