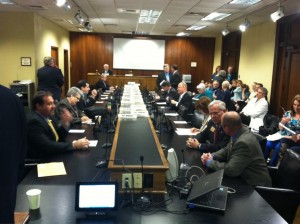 END_OF_DOCUMENT_TOKEN_TO_BE_REPLACED

Senator Missy Irvin and Representative Julie Mayberry have filed the first pro-life bills of the 2015 legislative session in Little Rock.

Senate Bill 53 and House Bill 1076 would require doctors performing a chemical abortion (using drugs such as RU-486) to be present during the procedure and make arrangements for a follow-up visit in the days after administering the drug.

Evidence from around the country suggests abortion-inducing drugs are increasingly being distributed without proper oversight from a doctor. This poses a serious threat to women’s health.

Abortion advocates often say abortion ought to be safe, legal, and rare. SB53 and HB1076 would help abortionists abide by that mantra and would curtail the proliferation of abortion-inducing drugs.

END_OF_DOCUMENT_TOKEN_TO_BE_REPLACED

According to the Northwest Arkansas Democrat-Gazette, the Fayetteville City Attorney has proposed a change to the city’s code governing local option petitions.

The proposal comes on the heels of a vote last month that repealed the city’s contentious “nondiscrimination” ordinance. Local residents were able to repeal the ordinance because state law and Fayetteville City Code allow voters to circulate petitions calling for a special election to keep or repeal any ordinance passed by the city council.

But now the attorney for the City of Fayetteville is proposing a change to the way that local petition process works.