Legislature Begins Looking at Two Key Bills During the Interim 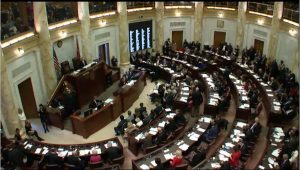 This week the Arkansas Legislature moved forward with plans to look at two key pieces of legislation between now and 2019.

The first is S.B. 583 by Senator Joyce Elliott. The legislature will study the feasibility of requiring 25% of lottery proceeds to fund scholarships; reinstating the 2.5 GPA requirement to be eligible for scholarships; and having independent consultants for the Arkansas Lottery.

The second is S.B. 774, the privacy bill by Senator Linda Collins-Smith. This bill would have required a person using a public shower, locker room, restroom, or similar facility on government property to use the facility that corresponds to the biological sex listed on his or her original birth certificate. The legislature will study this issue in the months to come.

Lawmakers cannot pass these bills during the interim study period, but can research these issues, collect testimony, and present recommendations when the Arkansas Legislature reconvenes as a whole.

We are glad lawmakers have agreed to look at these two issues during the interim. The next step is to schedule meetings where experts, members of the public, and others can testify at the Capitol.

END_OF_DOCUMENT_TOKEN_TO_BE_REPLACED

The Arkansas Democrat-Gazette reports an uptick in ticket sales at the Arkansas Lottery. According to the article, sales for September, 2015, were the highest of any September since 2011.

Here’s the bad news: Despite this uptick in sales, the Arkansas Lottery only allocated 18.3%–$6.6 million–of its gross revenue for scholarships last month.

While we’re still only one quarter of the way into Fiscal Year 2016, these numbers put the Arkansas Lottery on track to pay out roughly $71 – $75 million in scholarships this fiscal year–$80 million on the high side.

To put these numbers into perspective, $75 million is a full $25 million less than lottery proponents insisted the Lottery would provide for scholarships six years ago, and 18.3% is barely better than half of the percentage Louisiana’s lottery allocates.

What’s more, according to Lottery officials, the Lottery’s uptick in sales during September was bolstered in part by a new $20 scratch-off ticket and a high PowerBall jackpot.

This is more of the same failed strategy. The Lottery’s strategy since Day One has been to prop up ticket sales artificially by rolling out new games. People are always excited to try the new lottery games, but as soon as the novelty wears off, ticket sales decline again. END_OF_DOCUMENT_TOKEN_TO_BE_REPLACED

END_OF_DOCUMENT_TOKEN_TO_BE_REPLACED

Yesterday, lawmakers passed a bill abolishing the Arkansas Lottery Commission and making the Lottery part of the Department of Finance and Administration.

When the Arkansas Legislature established the Arkansas Lottery Commission in 2009, they made it an independent state agency with its own commissioners and very little outside accountability.

As a result, Arkansas has rolled out more gambling more quickly than any other state lottery we know; we have seen Lottery officials paid exorbitant salaries while college scholarships funded by the Lottery declined.

Senate Bill 7 brings more accountability to the Lottery by disbanding the Lottery Commission and making the Arkansas Lottery answerable to the Department of Finance and Administration as well as the Governor’s Office.

It now goes to Governor Hutchinson, who has said he will sign it.