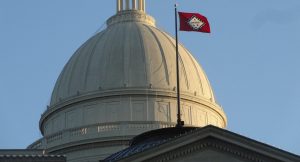 Yesterday we wrote about a proposal at the Arkansas Legislature to tax passive income of churches. The proposal was among those up for consideration at the legislature’s Tax Reform and Relief Legislative Task Force.

Under Arkansas law, income churches receive from things like interest earned on savings accounts or from the sale or rental of church property is not subject to the state income tax. The proposal before the task force would eliminate this exemption.

Sen. Jim Hendren (R — Gravette) is the senate chairman of the task force. I spoke with Sen. Hendren this morning, and he has assured me the task force has no interest in eliminating churches’ passive income tax exemption.

I am deeply grateful to everyone who contacted their state legislators yesterday to express their concern about this proposal, and I hope our elected officials will continue working to ensure taxes are not increased on churches and charities.

END_OF_DOCUMENT_TOKEN_TO_BE_REPLACED

Did You Know Lawmakers Nearly Voted to Let You Unknowingly Waive Your Right to a Jury Trial?

In a nutshell, these bills made it possible for people to unknowingly waive their right to a jury trial when signing a contract. If a company wanted to, they could include language saying that you waive your right to a jury trial in any contract they make you sign—including contracts for admission into a nursing home or hospital, leases, insurance, loans, and so on.

The bills made the waiver irrevocable—meaning once you signed away your right to a jury trial, you couldn’t get it back.

Our chief concern was that nursing homes would force residents to waive their right to a jury trial in order to live in the nursing home. If a grandmother were injured or killed due to nursing home neglect, she or her family would not be able to take her case before a jury.

The bills were filed at 9:00 AM on Tuesday. An hour later H.B. 1006 was in the hands of legislators on the House Judiciary Committee.

Our staff quickly analyzed the bill and drove to the Capitol. The bill’s ink practically was still wet when I sat down to testify in the committee room.

As politely as I could, I told lawmakers why we opposed the bill. “This affects old people,” I finally said. “How many old people in Arkansas even know this bill is being debated right now?”

Fortunately, the bill narrowly was defeated. Had Family Council not been there to oppose it, I am not sure what would have happened.

Several different lawmakers told me the legislation was prompted by a recent court case regarding a dispute over a loan. Lawmakers wanted to make it possible for borrowers and lenders to settle their differences outside of the jury trial system. Personally, I don’t object to that, but passing a blanket proposal that would let elderly nursing home residents and their families unknowingly sign away their right to a jury trial is just plain irresponsible.

After H.B. 1006 failed in committee, Sen. Hutchinson amended S.B. 5. He narrowed the bill so that it only applied to loans, and he took out the language about people being able to sign the waiver unknowingly and the waiver being irrevocable. We decided we could live with those changes, so Family Council quit opposing S.B. 5.

The amended version of S.B. 5 passed the Arkansas House Thursday and has gone to Gov. Hutchinson to be signed into law.

This isn’t the first time lawmakers have tried to take away Arkansans’ right to a jury trial.

Fifteen years ago Family Council spent almost an entire legislative session battling it out with members of the nursing home industry who wanted to shield themselves from lawsuits. At that time, they wanted to take away nursing home residents’ right to go to court. Our staff attorney, Martha Adcock, spent more hours than I can count working with lawmakers to defeat that bad proposal.

I am glad we were successful last week, and I am deeply grateful to the state legislators who helped defeat H.B. 1006 and amend S.B. 5 to address our concerns.

Sadly, this fight is not over. Rep. Bob Ballinger, a sponsor of the bill, plans to continue advocating for the passage of the portions of the bill that lawmakers rejected. Rep. Ballinger told lawmakers that work needs to continue in order to help the business community.

END_OF_DOCUMENT_TOKEN_TO_BE_REPLACED

The filing period for candidates to run for office in Arkansas ended earlier this week.

Below is a list of all the candidates that filed for these offices.