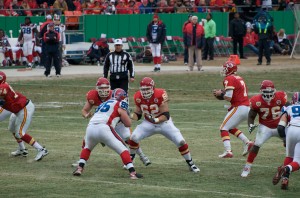 The NFL has been in the limelight a good bit lately for its poor handling of domestic violence. The organization seems to be struggling in another area as well, however: Religious liberty.

Last night Kansas Chiefs free safety Husain Abdullah scored a touchdown against the New England Patriots. When he reached the endzone Abdullah slid on his knees and prayed. As a result, the referees threw a yellow flag, and the Chiefs were penalized 15 yards for unsportsmanlike conduct.

The Kansas City Star describes Abdullah as a devout Muslim who promised himself if he ever scored a touchdown he would bow in prayer.

The NFL does have a rule which states, “players are prohibited from engaging in any celebrations or demonstrations while on the ground.” However, the NFL typically makes exceptions for prayer–which is why players like Tim Tebow and others were able to drop to the ground and thank God in the endzone.

Some are alleging the penalty was a result of Abdullah’s slide on the ground–not the prayer. It seems difficult to distinguish the two, however.

Earlier this month Washington Redskins quarterback Robert Griffin, III, turned his “Know Jesus, Know Peace” t-shirt inside out before going on camera for a gameday press conference in order to avoid a potential fine from the NFL. Officials said the decision was based on a rule barring players from wearing shirts with personal messages on gameday, and that the shirt was not an authorized Nike product. However, as commentators have noted, other Redskins players appeared on camera wearing non-Nike products sporting personal messages, and none of them have been fined.

The point, here, is not to try to equate Islam with Christianity or to say being a Muslim is no different from being a Christian. There’s no doubt Christianity and Islam are different. The point, rather, is to say that people are and should be free to exercise their religion as part of their everyday lives–including in the workplace. Courts have ruled that neither employees nor employers lose their religious liberties by going to work. NFL players may not have occupations like yours or mine, but they play football for a living, and when they suit up and take the field, it’s just another day at the office for them. If an accountant is free to say a prayer at his desk or bring a Bible to work, a football player should be free to pray in the endzone or wear a “Jesus” t-shirt.

Given the kinds of problems the NFL has battled lately, is now really a good time to penalize players for talking about God and prayer?