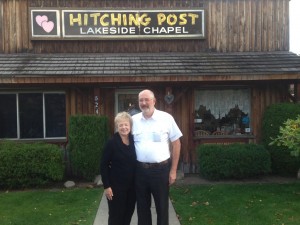 We have written recently about two ministers (Mr. and Mrs. Knapp)  in Coeur d’Alene, Idaho, who face the prospect of fines and jail time for failing to permit a same-sex wedding at their wedding chapel.

Same-sex marriage became legal in Idaho a few weeks ago when the U.S. Supreme Court declined to hear an appeal over a lower court ruling striking the state’s marriage laws. According to attorneys from Alliance Defending Freedom–who is representing the ministers–city officials told the pair multiple times that their wedding chapel would be required to perform same-sex weddings. The ministers filed suit against the city. Now the city is backing off, saying that because the wedding chapel is a nonprofit entity, they won’t be required to perform same-sex weddings after all.

There’s just one problem, ADF writes: The Hitching Post Wedding Chapel is not non-profit. It is a for-profit chapel. In fact, ADF says there are four things that need to be set straight about this case concerning religious liberty:

This is a critical case for religious liberty in America. The U.S. Supreme Court’s recent ruling in the Hobby Lobby case makes it clear that business owners do not forfeit religious liberty by entering the marketplace. In America, you are not only free to engage in business, but to do so in a manor consistent with your deeply-held convictions.