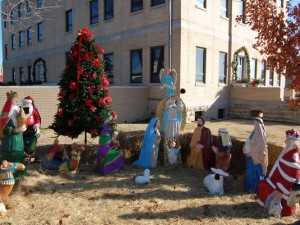 The ruling was the result of a lawsuit filed against the county by the American Humanist Association. The judge ruled the county must either stop putting up the Nativity scene or create a public forum on its lawn allowing people of all religions to place decorations on courthouse property.

However, it’s worth pointing out that the U.S. Supreme Court has ruled Nativity scenes on public property constitutional in the past. In Lynch v. Donnelly the court ruled a Nativity scene on city property did not violate the Establishment Clause, writing, there was “insufficient evidence to establish that the inclusion of the crèche [Nativity scene] is a purposeful or surreptitious effort to express some kind of subtle governmental advocacy of a particular religious message. . . . The crèche [Nativity scene] in the display depicts the historical origins of this traditional event long recognized as a National Holiday [Christmas].”

Besides a Nativity scene, the Christmas display in Baxter County includes a large Christmas tree with a Santa Claus standing next to it — neither of which is a religious decoration. In the background, an arch of holly is visible surrounding the doors to the courthouse, and red bows are visible on the building. Both are Christmas decorations, but not religious.

The courthouse’s Christmas decorations are not exclusively religious; in fact, they look like the kind of decorations other judges have ruled constitutional.

We keep saying it: Christmas celebrates the birth of Jesus Christ. It is also an official holiday in this country. Why would our government be free to recognize Christmas as a holiday; give its employees time off from work on Christmas day; put up decorations commemorating Christmas; but not even mention the very event Christmas celebrates? It’s ridiculous.