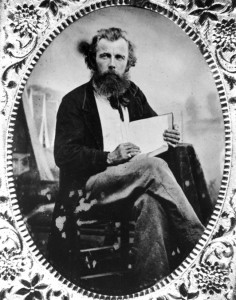 As Thanksgiving approaches, we want to take time to highlight a piece of Arkansas history: The very first Thanksgiving proclamation issued after Arkansas became a state.

The proclamation issued by Arkansas’ third governor, Governor Thomas Drew, set aside Thursday, December 8, 1847, as a day of thanksgiving. The proclamation reads as follows:

Whereas, an all wise and merciful Providence has dispensed blessings of the most bountiful and diversified character among the people of this state, in the abundance of the various agricultural crops, the universal prosperity of our people and their unexampled good health, it is deemed worthy of a greatful people to make public manifestation of their sense of the renewed obligations under which we have been placed, by the appointment of a day of general THANKSGIVING throughout the state.

Be it known, therefore, that I, Thomas S. Drew, Governor of the State of Arkansas, have appointed Thursday, the 9th day of December next as a day of THANKSGIVING, which is hereby proclaimed and recommended to the good of people in every county and town in the state as a fit day and proper time to acquit ourselves, each and every one, of a high and praiseworthy duty to the Bountiful and Merciful Providence.

Given under my hand at Little Rock and to which is affixed the Great Seal of the State of Arkansas, this 12th day of October, 1847, and the Independence of the United States the seventy-second year.

By the Governor,
Thomas S. Drew

Just for Fun: William Shatner Explains How to Deep-Fry a Turkey

Here’s The Proclamation That Started Our Modern Thanksgiving