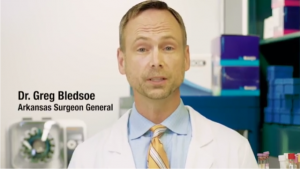 This week Arkansas Surgeon General Dr. Greg Bledsoe was featured in an ad against the two marijuana proposals, Issues 6 and 7, that will appear on the Arkansas ballot this November.

Dr. Bledsoe has been outspoken against the legalization of marijuana. Recently he was featured in a video explaining, among other things, why marijuana itself cannot be considered “medicine.”

In September Dr. Bledsoe released a statement at a press conference with Gov. Hutchinson and numerous other physicians, saying,

“These marijuana proposals [Issues 6 & 7] are written with broad language that would open the floodgates for marijuana use in our communities.  Individuals could obtain marijuana for diagnoses such as ADHD, insomnia, and migraine headaches, allow the growing of marijuana in and around our neighborhoods, and even provide marijuana for minors with parental consent.  In addition, the language of these proposals would allow the selling of edible marijuana products in our state, products that have been packaged to appear like candy and sold in sodas, cookies, and brownies with cartoon marketing attractive to children.”

You can watch the new ad with Dr. Bledsoe below.