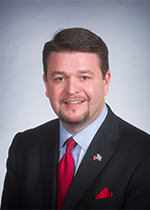 Sen. Jason Rapert (R-Conway) has filed legislation delaying implementation of the Arkansas Medical Marijuana Amendment until marijuana has been legalized at the federal level.

Right now there is no question Arkansas’ marijuana amendment and related laws and programs blatantly violate federal law. Sen. Rapert’s bill puts these programs on hold until federal law changes, making it possible for Arkansas to move forward with a marijuana program that does not fundamentally violate laws established by Congress.