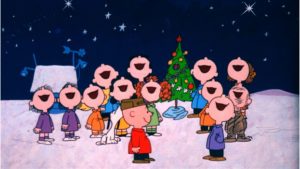 In the summer of 1965 television executives approached Charles Schultz, creator of Peanuts, about writing, drawing, and animating a Peanuts Christmas special in just six months.

Schultz and his team finished the special a week and a half before the broadcast date. Many believed it would be an unmitigated disaster. Television executives even said they would have canceled the program had their TV schedule allowed it.

On December 9, 1965, an estimated 15.5 million homes tuned in to watch “A Charlie Brown Christmas.” It has aired every December since.

The simple storyline is part of what makes this Christmas special so endearing. Charlie Brown searches for the true meaning of Christmas. The answer finally comes when Linus van Pelt recites Luke 2:8-14.

Because of the Charlie Brown Christmas special, Luke 2:8-14 may be the most widely heard passage of scripture from the entire Bible. It certainly is the most widely broadcasted in the history of television. For more than five decades, millions of children and adults have heard these words each December:

And there were in the same country shepherds abiding in the field, keeping watch over their flock by night. And, lo, the angel of the Lord came upon them, and the glory of the Lord shone round about them: and they were sore afraid. And the angel said unto them, Fear not: for, behold, I bring you good tidings of great joy, which shall be to all people. For unto you is born this day in the city of David a Saviour, which is Christ the Lord. And this shall be a sign unto you; Ye shall find the babe wrapped in swaddling clothes, lying in a manger. And suddenly there was with the angel a multitude of the heavenly host praising God, and saying, Glory to God in the highest, and on earth peace, good will toward men.

You can watch Linus recite this famous passage of scripture by clicking here or watching the video below.

Your financial support for Family Council is making Arkansas a better place to live, work, and raise a family. It is promoting and strengthening home schooling. It is helping us fight abortion and making Arkansas a more pro-life state. Click here to send a generous, tax-deductible donation today.

Bing Crosby Sings Away in a Manger

Pentatonix: Mary, Did You Know?

Remembering the Christmas Truce of 1914