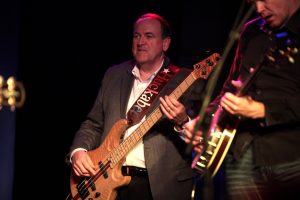 Last week former Arkansas Governor Mike Huckabee made headlines for being appointed too — and subsequently forced out of — a volunteer position on the board of the Country Music Association Foundation.

The CMA Foundation provides grants and charitable donations for music education. One of the foundation’s goals is to help students connect with music.

In a letter to the CMA Foundation board, Huckabee outlined the profound impact music had on his own childhood:

Music changed my life.  I grew up dirt poor in south Arkansas.  No male upstream from me in my entire family ever even graduated from high school.  I had no reason to believe that my life would consist of anything but scratching out a meager living and hoping to pay rent in a house I would never own just as generations before me had done.

Music changed that.  The gift of an electric guitar by my parents when I was 11 put in my hands a future.  It took them a year to pay for the $99 guitar they bought from the J. C. Penney catalog.  Granted, I was never good enough to make a full-time living at music, but the confidence I gained by playing, being in front of people, and competing against myself and the low expectations I grew up with was transformative.

The CMA Foundation said it believed it could benefit from Governor Huckabee’s experience as a leader in Arkansas. Given this, along with the governor’s story and his love for music, it made sense when he was appointed to the CMA Foundation Board last week.

However, wealthy record label owners and liberal music agents immediately began hurling insults at Gov. Huckabee and threatening to boycott the CMA simply because Huckabee — like tens of millions of other Americans — believes marriage ought to be the union of one man and one woman.

It appears that I will make history as having the shortest tenure in the history of the CMA Foundation Board.  I genuinely regret that some in the industry were so outraged by my appointment that they bullied the CMA and the Foundation with economic threats and vowed to withhold support for the programs for students if I remained.  I had NO idea I was that influential!  I’m somewhat flattered to be of such consequence when all I thought I was doing was voluntarily serving on a non-profit board without pay in order to continue my decades of advocacy for the arts and especially music.

The message here is “Hate Wins.”  Bullies succeeded in making it untenable to have “someone like me” involved.   I would imagine however that many of the people who buy tickets and music are not that “unlike me.” . . . .

If the industry doesn’t want people of faith or who hold conservative and traditional political views to buy tickets and music, they should be forthcoming and say it.  Surely neither the artists or the business people of the industry want that.

Until recently, the arts was the one place America could set aside political, geographical, racial, religious, and economic barriers and come together.  If the arts community becomes part of the polarization instead of bridging communities and people over the power of civil norms as reflected in the arts, then we as a civilization may not be long for this earth.

Frankly, I’m not sure what Nashville is thinking on this one.

Country music’s core fan base is in Middle America — the most conservative and most religious part of the country.

Ousting Mike Huckabee from the CMA Foundation’s board for being a conservative and holding a Christian view of marriage sends a clear message as to what the country music industry thinks of its own fans.

The message seems to be if you want to help promote music and education, Christians need not apply.