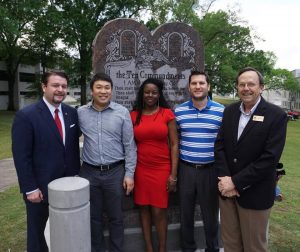 The legislature authorized the privately funded monument in 2015, and construction was completed last year. However, less than 24 hours after the initial monument was unveiled, it was destroyed when a man plowed a car into it.

The replacement monument includes concrete bollards to prevent similar incidents in the future.

The ACLU has promised to sue the state to have the monument removed — even though the U.S. Supreme Court ruled an identical monument constitutional in Texas nearly thirteen years ago — and the leader of the Satanic Temple was present before today’s unveiling ceremony, along with several protesters.

The Ten Commandments are one of the earliest examples of the rule of law in human history, and they have had a tremendous impact on western civilization. The Magna Carta, the Declaration of Independence, the Constitution, and the Bill of Rights are amazing documents, but the Ten Commandments are the great-great-granddaddy of them all.