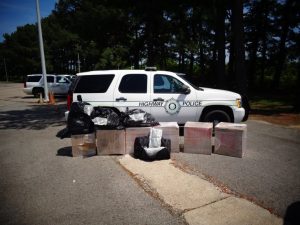 Since April 21, the Arkansas Highway Patrol has seized nearly 800 pounds of marijuana at a weigh station along I-40 in Alma, the Arkansas Democrat-Gazette reports.

Authorities believe the marijuana was obtained legally in California or Colorado — where recreational marijuana is legal — before being loaded for illegal transport across state lines.

This is a problem we have discussed in the past. So-called “medical” or “recreational” marijuana is easily diverted to the black market or taken across state lines for sale in states where marijuana is still illegal.

There simply are not enough safeguards in place to prevent “medical” and recreational marijuana from falling into the wrong hands or being sold illegally on the black market. That’s why Arkansans need to do as much as possible to protect our state from the dangers that marijuana pose.

Photo by the Arkansas Department of Transportation.