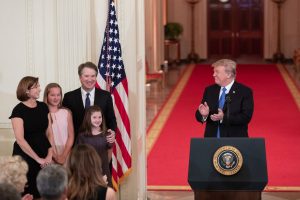 Judge Kavanaugh was appointed to the U.S. Court of Appeals for the District of Columbia Circuit by President George W. Bush in 2003.  He was confirmed by the U.S. Senate in 2006, and has served as a federal judge for the past 12 years.

However, as a federal judge, Kavanaugh has opined that the Office of Refugee Resettlement is not obligated to help minors in its custody obtain abortions.

“Judge Kavanaugh has a long and praiseworthy history of judging as an originalist, and we look forward to having a justice with his philosophical approach on the Court.”

At the same time, our friends at American Family Association issued a statement calling on the U.S. Senate to oppose Judge Kavanaugh’s confirmation to the court, saying that while Judge Kavanaugh has issued some good opinions, his reasoning behind those opinions is flawed. They write,

So what should we make of two leading, conservative organizations disagreeing over Judge Kavanaugh’s appointment? Here are two thoughts to keep in mind:

Updated 7/11/2018: American Family Association has released a follow-up statement indicating that upon further consideration it has decided it will not actively oppose Judge Kavanaugh’s appointment for the time being.