The following is a proclamation issued by the Continental Congress on March 20, 1779, calling on Americans to fast and pray, seeking God’s forgiveness as a nation. 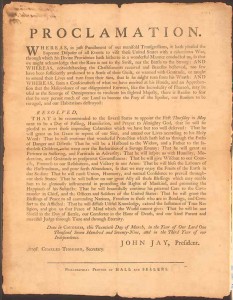 WHEREAS, in just Punishment of our manifold Transgressions, it hath pleased the Supreme Disposer of all Events to visit these United States with a calamitous War, through which his Divine Providence hath hitherto in a wonderful Manner conducted us, so that we might acknowledge that the Race is not to the Swift, nor the Battle to the Strong: AND WHEREAS, notwithstanding the Chastisements received and Benefits bestowed, too few have been sufficiently awakened to a Sense of their Guilt, or warmed with Gratitude, or taught to amend their Lives and turn from their Sins, that so he might turn his Wrath: ANDWHEREAS, from a Consciousness of what we have merited at his Hands, and an Apprehension that the Malevolence of our disappointed Enemies, like the Incredulity of Pharaoh, may be used as the Scourge of Omnipotence to vindicate his slighted Majesty, there is Reason to fear that he may permit much of our Land to become the Prey of the Spoiler, our Borders to be ravaged, and our Habitations destroyed:

RESOLVED,
THAT it be recommended to the several States to appoint the First Thursday in May next to be a Day of Fasting, Humiliation, and Prayer to Almighty God, that he will be pleased to avert those impending Calamities which we have but too well deserved: That he will grant us his Grace to repent of our Sins, and amend our Lives according to his Holy Word: That he will continue that wonderful Protection which hath led us through the Paths of Danger and Distress: That he will be a Husband to the Widow, and a Father to the fatherless Children, who weep over the Barbarities of a Savage Enemy: That he will grant us Patience in Suffering, and Fortitude in Adversity: That he will inspire us with Humility, Moderation, and Gratitude in prosperous Circumstances: That he will give Wisdom to our Councils, Firmness to our Resolutions, and Victory to our Arms: That he will bless the Labours of the Husbandman, and pour forth Abundance, so that we may enjoy the Fruits of the Earth in due Season: That he will cause Union, Harmony, and mutual Confidence to prevail throughout these States: That he will bestow on our great Ally all those Blessings which may enable him to be gloriously instrumental in protecting the Rights of Mankind, and promoting the Happiness of his Subjects: That he will bountifully continue his paternal Care to the Commander in Chief, and the Officers and Soldiers of the United States: That he will grant the Blessings of Peace to all contending Nations, Freedom to those who are in Bondage, and Comfort to the Afflicted: That he will diffuse Useful Knowledge, extend the Influence of True Religion, and give us that Peace of Mind which the World cannot give: That he will be our Shield in the Day of Battle, our Comforter in the Hour of Death, and our kind Parent and merciful Judge through Time and through Eternity.

Done in CONGRESS, this Twentieth Day of March, in the Year of Our Lord One Thousand Seven Hundred and Seventy-Nine, and in the Third Year of our Independence.
JOHN JAY, President.
Attest. CHARLES THOMSON, Secretary.

Words from Our Founders: Josiah Bartlett

Words From Our Founders: Benjamin Franklin on Christmas