Below is an excerpt from a letter written by John Jay, Founding Father and first Chief Justice of the Supreme Court, to John Murray. The letter is dated April 15, 1818, and discusses much related to Christian scripture and theology. 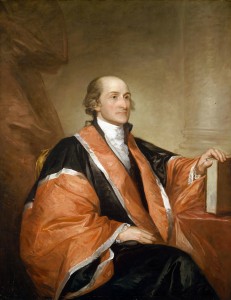 “It is true that the law was given by Moses, not however in his individual or private capacity, but as the agent or instrument, and by the authority of the Almighty. The law demanded exact obedience, and proclaimed: “Cursed is every one that continueth not in all things which are written in the book of the law to do them.” The law was inexorable, and by requiring perfect obedience, under a penalty so inevitable and dreadful, operated as a schoolmaster to bring us to Christ for mercy.

“Mercy, and grace, and favour did come by Jesus Christ; and also that truth which verified the promises and predictions concerning him, and which exposed and corrected the various errors which had been imbibed respecting the Supreme Being, his attributes, laws, and dispensations. Uninspired commentators have dishonoured the law, by ascribing to it, in certain cases, a sense and meaning which it did not authorize, and which our Saviour rejected and reproved.”

Words From Our Founders: John Jay on Just War

Words from Our Founders: The Continental Congress, Pt. 2

Who’s the Enemy When It Comes to Unborn Children?

The Drug Problem Is Worse Than People Think