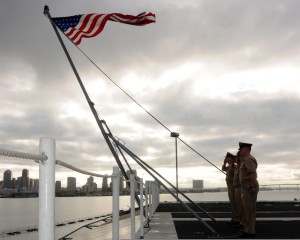 The U.S. Military is, without a doubt, unique. It is the first military in the history of the world capable of deploying to almost any country on any inhabited continent in a matter of days or hours.

In the wake of World War II and the beginning of the Cold War, that became a U.S. priority: Put military personnel anywhere at a moment’s notice and in record time. That’s why we keep ships at sea 24 hours a day, and that’s why we have so many military bases scattered all over the world. The idea was we should be able to aid our allies and stop our enemies before the fighting reaches our shores.

This week, however, Associated Press has highlighted how that rapid deployment capability is being used for something else: Humanitarian aid in the Philippines.

Within hours after the typhoon struck the Philippines, United States Marines were on the way from Japan. More than 600 U.S. military personnel are ashore there right now, offering food, water, medicine, and aid–and more are on the way.

The AP quoted one Filipino villager as saying, “They are saving us.” He was talking about the American military. How many times in human history has a military landed in a country not to conquer, but to “save”? Very few.

The idea that an army would show up in your country and help you rebuild your home without seizing or subjugating your land is a distinctly modern concept. It rarely, if ever, appears in history. But it’s a major characteristic of the United State military. Whether we realize it or not, that characteristic stems from America’s Judeo-Christian heritage. The importance we place on individual human life and the belief that we should come to the aid of our neighbors are Judeo-Christian values. When we rush to aid a country that has been devastated by a typhoon, we’re living out those values on the international scene.

Colin Powell summed it up in 2003 when he told a group of dignitaries, “[O]ur record of living our values and letting our values be an inspiration to others I think is clear. And I don’t think I have anything to be ashamed of or apologize for with respect to what America has done for the world. We have gone forth from our shores repeatedly over the last hundred years…and put wonderful young men and women at risk, many of whom have lost their lives, and we have asked for nothing except enough ground to bury them…”

When disaster strikes, foreign nations rarely cry out to the Russian or Chinese militaries for help. They call on America. That’s something we should all be proud of.

Read What Billy Graham Had to Say to Arkansas