John Stonestreet from the Chuck Colson Center for Christian Worldview has a short, one-minute radio spot explaining a troubling way in which eugenics is making a comeback in our society.

Generally speaking, eugenics is the idea that:

Historically, the solution eugenics offers to this “burden” has almost always been to kill the person in question or forcibly sterilize them, preventing them from reproducing.

It’s the 19th-century pseudoscience at the root of Nazism and the U.S. Supreme Court’s infamous Buck v. Bell forced sterilization decision. But Eugenics, the idea that some lives are unworthy of life, is far from dead. In fact, it’s making a subtle and troubling comeback.

Doctors in the U.K. have just announced that they’ve pioneered the most effective embryo-screening technique to date, allowing couples with potential genetic illnesses to avoid giving birth to genetically diseased children.

‘Parents at risk of passing on a genetic disorder,’ said Paul Serhal, at the Centre for Reproductive and Genetic Health, ‘are faced with heartbreaking implications. . . [This] breakthrough…means that parents affected may be able to pursue treatment confident that their condition wouldn’t be handed down.’

Stonestreet goes on to say the “treatment” parents could seek would most likely be abortion. Listen to the full radio spot below.

Recently we wrote out a few points analyzing Arkansas’ 2013 abortion statistics. Today we have compiled additional statistics on abortion in Arkansas for the past 13 years.

It is interesting that while abortion has dropped among women under 30, the number of abortions performed on women 30 or older has remained roughly the same or risen slightly since 2000. We hope to have more information on these trends in the future.

Below are charts and graphs showing abortion trends among each age group of women in Arkansas from 2000 to 2013: 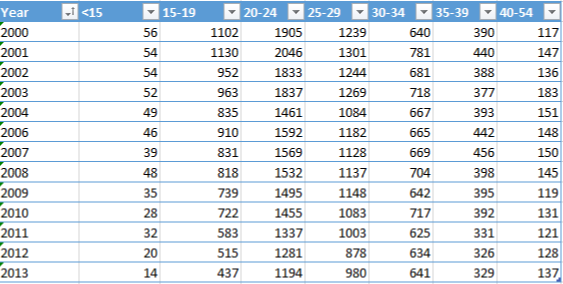 END_OF_DOCUMENT_TOKEN_TO_BE_REPLACED

Overview of Abortion in Arkansas (2013)

Recently we wrote about the Arkansas Department of Health’s report on abortions in Arkansas for 2013. We have analyzed some of the facts and figures in the 2013 report and the department’s reports for prior years. Below are some simple bullet points offering an overview of abortion in Arkansas for the year 2013.

Abortion Statistics for Arkansas (Since 1973):