Family Council President Jerry Cox released a statement, saying, “I am pleased to announce the 2016 Arkansas Voter’s Guide from Family Council is available. We surveyed candidates for every state and federal office this year—including candidates for U.S. President. We asked them to respond to eleven survey questions. Our 2016 survey covers everything from abortion and marriage to economics and gun legislation. This will help voters understand where candidates stand on a wide variety of issues.”

Cox noted the response rate from candidates for the 2016 Arkansas Voter’s Guide was one of the highest ever. “Family Council has been surveying candidates each election year since 1990. This year, seventy-eight percent of candidates completed our survey. Altogether, almost ninety percent of candidates for Arkansas House, Arkansas Senate, U.S. House, and U.S. Senate completed our survey. That’s the highest response rate ever. It is refreshing to see all these candidates displaying greater transparency to the people of Arkansas.”

Cox noted the 2016 Arkansas Voter’s Guide is nonpartisan and free to anyone who requests a copy of it. “Our goal is to help Arkansans cast informed votes. The Arkansas Voter’s Guide does not favor one candidate over another. Family Council does not endorse candidates. We simply ask the candidates where they stand on issues Arkansans care about, and then we share the candidates’ responses with voters. We also have included contact information voters can use to contact candidates who chose not to complete our survey. Anyone can request copies of the Arkansas Voter’s Guide. All they have to do is call our office in Little Rock at (501) 375-7000, and we will send them as many guides as they need. Voters also can see candidates’ survey responses online at www.ArkansasVotersGuide.com.”

END_OF_DOCUMENT_TOKEN_TO_BE_REPLACED 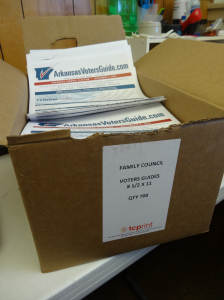 Last Tuesday was historic for a number of reasons. Republicans practically swept the election at every level in Arkansas. That’s a first for our state.

Arkansas also saw record voter turnouts, at least for recent history. We said it would be impressive if 800,000 voters came to the polls this year. It is estimated that more than 850,000 voted in this election. That’s incredible for a midterm!

The election was unique both in voter turnout and election results, but it was also unique in this: Family Council distributed enough Arkansas Voter’s Guides to reach at least 1 out of every 5 voters–and maybe many more than that!

We distributed nearly 175,000 printed copies of the Arkansas Voter’s Guide, and more than 11,500 people visited our online version of the guide at www.ArkansasVotersGuide.com.

Assuming everyone who requested a guide or visited our website was a voter, we distributed enough voter’s guides in print and online to reach 22% of the people who voted last week.

Even if some of the people who looked at our guide decided not to vote, many copies of the printed guide went to couples or groups of people–such as Sunday school classes–which means they were shared and used by more than one person. I would estimate each printed copy of the guide we distributed was used by anywhere from 1 to 3 people, at least. That means that while we distributed enough copies of the Arkansas Voter’s Guide in print and online to reach 22% of the voters, many more probably saw a copy of our guide. It is possible that as many as one-quarter or more of voters put the Arkansas Voter’s Guide to use this year.

Hats off to everyone who helped make that happen! To the people who donated money to fund the Arkansas Voter’s Guide this year; everyone who ordered copies of the guide for their friends and neighbors; and all the folks who passed the guide out at work, at church, or wherever, thank you! You helped us serve the people of Arkansas in a very real way.

I hope you will continue to follow the work of Family Council in the days to come. We plan to have some exciting announcements between now and the end of the year, so stay tuned. And be sure to follow us online at www.FamilyCouncil.org, on Facebook, and on Twitter.

END_OF_DOCUMENT_TOKEN_TO_BE_REPLACED

Don’t Let Election Day Sneak Up on You! 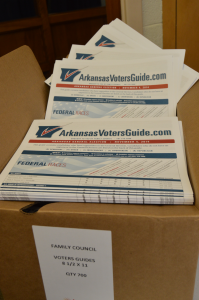 Early voting is going on right now, and Election Day is just seven days away. Don’t let the elections sneak up on you!

Too many people wait until Election Day before trying to figure out who which candidates they will support. Part of casting an informed vote is knowing ahead of time who is running and where they stand on the issues.

We’ve talked a lot about the Arkansas Voter’s Guide this year. To date we have distributed roughly 160,000 printed copies of the guide–and we still have more printed copies available. To order your free, printed Arkansas Voter’s Guide, click here. You can order for yourself, your church, your Sunday school class, your friends, your family–whoever! But don’t wait too long to order, because Election Day is approaching quickly, and supplies are running out.

If you prefer to read the Arkansas Voter’s Guide online, the links below will take you directly to portions of the online guide.

To find candidates for State Senate and State House, click here, and scroll down. You can also click here to search for specific races or candidates.