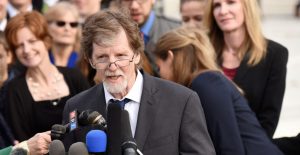 In June, Colorado baker Jack Phillips of the Masterpiece Cakeshop won a landmark victory when the U.S. Supreme Court ruled 7-2 that Jack could not be forced to violate his deeply held religious convictions.

In 2012 Jack Phillips declined a request to bake a custom cake for a same-sex ceremony. Colorado’s Civil Rights Commission targeted Masterpiece Cakeshop under the state’s anti-discrimination law. After six years of litigation and court hearings, Jack finally won his case this summer.

In its ruling, the U.S. Supreme Court chastised Colorado’s Civil Rights Commission for its obvious hostility toward Jack Phillips.

The story should have ended with a Supreme Court victory for Masterpiece Cakeshop. Instead, the Civil Rights Commission is after Jack Phillips again — this time for declining to bake a cake for a gender-transition celebration.

About a year ago, a caller to Jack’s store asked Jack to bake a cake celebrating a gender transition. To be blunt, it was an obvious set-up.

For starters, the request came in hours after it was reported that the Supreme Court would hear Jack’s case. Jack’s wife, who answered the phone, was asked for a cake with blue on the outside and pink on the inside, to represent the caller’s transition from male to female. When Mrs. Phillips politely told the caller that her husband didn’t make custom cakes for that kind of event, she was asked to repeat herself so that someone else could hear.

At no time did anyone in the Phillips family ask the caller about any personal characteristics, such as sex or gender identity. The only thing they knew about the caller was the request itself.

But that didn’t matter. About a month later Phillips received a copy of a complaint charging him with discriminating on the basis of gender identity.

Attorneys at Alliance Defending Freedom are once again standing beside Jack Phillips, writing,

Enough is enough. Alliance Defending Freedom is “going on offense” and suing the state of Colorado on Jack’s behalf for its blatant targeting of him.

You would think that a clear Supreme Court decision against their first effort would give them pause. But it seems like some in the state government are hell-bent on punishing Jack for living according to his faith.

If that isn’t hostility, what is?

END_OF_DOCUMENT_TOKEN_TO_BE_REPLACED

LGBT activists recently targeted a Methodist church in Glenwood for encouraging its members not to take their children to Magic Springs on LGBT Pride Day. Watch the video below to learn more.