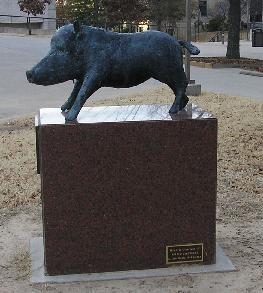 The Arkansas Lottery Commission voted yesterday to authorize monitor games despite objections from Arkansas lawmakers. That was a very controversial move, but another decision by the commission is receiving much less attention: The decision to pursue marketing in conjunction with Arkansas’ colleges and universities.

According to the Associated Press, Lottery Director Bishop Woosley says the lottery might sell Arkansas Razorback-themed lottery tickets and advertise the lottery at college sporting events. For a lottery that rolled out more gambling in its first two months than other states did in five years, a Razorback scratch-off ticket may not sound like much; the bigger question is does this vote allow the Arkansas Lottery to do more “marketing” on college campuses than Woosley let on?

This chapter does not prohibit the [lottery] commission from designating certain of its agents and employees to sell or give tickets or shares directly to the public.

[T]his section does not preclude the [lottery] commission from selling or giving away tickets or shares for promotional purposes.

Subject to prior approval by the commission, retailers may give away tickets or shares as a means of promoting goods or services to customers or prospective customers.

So under the enabling legislation that established the Arkansas Lottery Commission in 2009, the commission can sell or give away lottery tickets for promotional purposes, and retailers may (with the commission’s blessing) give away tickets as well.

This raises a question: Does the Arkansas Lottery Commission plan to “promote” the Arkansas Lottery by giving away free lottery tickets on college campuses? For instance, might they or one of their retailers give free Razorback-themed scratch-off tickets to the first 1,000 people (or first 1,000 students) who come to a particular football game at the University of Arkansas next year? Might they someday want to give away lottery tickets at student registration or other on-campus events at our state schools?

It may sound like a bit of a reach, but given the Arkansas Lottery Commission’s actions so far, I really would not put anything past them. Companies routinely market free merchandise to college students, because they know an 18 or 19 year old may provide profitable business for decades to come. There’s no reason to think a college student who wins a few dollars on a free scratch-off ticket he got at a baseball game wouldn’t want to buy more lottery tickets later as a result.

The difference, however, between marketing lottery tickets to college students and marketing, say, hamburgers or hair products is that gambling is addictive, and studies have repeatedly indicated that the younger a person is when they start gambling, the more prone they are to developing a gambling problem.

In-game advertisements for the Arkansas Lottery at sporting events will indirectly market the lottery to college students who attend the games. That much is obvious. The bigger question the Arkansas Lottery needs to answer is whether or not their plans to “advertise” on college campuses end there.

Editorial: Lottery Panel Has No Excuse For Lapse