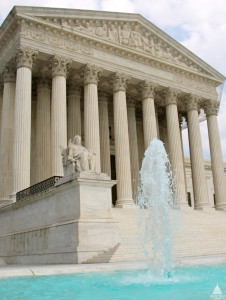 As we have written before, the federal Department of Health and Human Services promulgated rules under Obamacare requiring businesses to pay for sterilization, contraceptives, and abortion-inducing drugs1. The problem is many Americans–and American business owners–have strong, religious objections to paying for these services.

The issue has never been whether or not an employer can bar an employee from using contraceptives or abortion-inducing drugs, but whether or not the federal government can force an employer to pay for those drugs. For instance, Hobby Lobby–one of the plaintiffs in today’s ruling–does not, to our knowledge, fire employees for using contraceptives or abortifacients; the owners simply do not want to be required to pay for these drugs, because doing so violates their deeply-held religious convictions.

The Supreme Court ruled, today, that Hobby Lobby, Conestoga, Mardel, and other “closely held, for-profit corporations” can and do have religious liberties under the First Amendment to the U.S. Constitution. This ruling makes sense for the following reasons:

1 Note: Many people claim the HHS mandate does not include abortion-inducing drugs. The truth is the mandate includes so-called “emergency contraception,” which leading experts say can prevent a fertilized egg from implanting in the womb, thus constituting an abortion in the minds of many.

Student Banned from Distributing Flier Because of Bible Verse