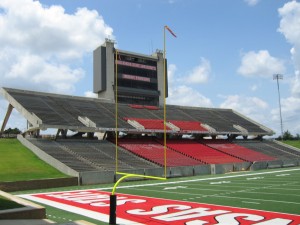 For the second time in a month the Freedom From Religion Foundation is making waves in Arkansas–this time over the Arkansas State University football team.

Recently, Red Wolves football players decided to honor two students who died this year. The players met and agreed the best way to do that was by placing a small cross-shaped decal featuring the names of the two students on the backs of their football helmets.

All this was well and good until the university received complaints from people in contact with the Freedom From Religion Foundation. The complaint alleged that by letting the players put a cross on the backs of their helmets, the school was endorsing Christianity. The school has now forced the players to change the stickers.

Now, let’s pause here and think back a few years ago, when Tim Tebow was a star college quarterback  in Florida. Tebow routinely (and openly) discussed his faith and wore scripture references during ballgames. Was the school somehow violating the First Amendment to the United States Constitution by letting him do that? No.

So if it’s alright for Tim Tebow to be seen on national TV with “John 3:16” written on his face in eyeblack, what’s wrong with ASU players wearing crosses on the backs of their helmets to honor their friends? Nothing.

College students do not lose their religious liberty and their freedom of speech by donning a football jersey. Schools do not have the authority to make speech by students religiously-neutral; they do, however, have a responsibility to protect students’ First Amendment rights. In this case, Arkansas State University is failing to do that.

Photo Credit: “ArkSt. facing Northwest” by Intrepidsfsu (talk) – I created this image entirely by myself.. Via Wikipedia.

Stoplight: ‘The Universe Next Door’