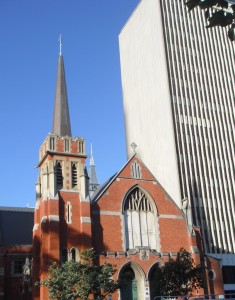 Yesterday we wrote about troubling developments in Houston, Texas. The city issued subpoenas demanding some local pastors turn over all sermons and pastoral communications dealing with Houston’s controversial “nondiscrimination” ordinance, the city’s mayor, homosexuality, and the effort to repeal the city ordinance.

Some of the news stations who picked up the story reported the pastors served with the subpoena are part of a lawsuit against the city. Unfortunately that is not the case.

The actual lawsuit over the city ordinance lists Jared Woodfill, Steven F. Hotze, F.N. Williams, Sr., and Max Miller as plaintiffs. As near as we can tell, at least two of these plaintiffs (Mr. Miller and Mr. Williams) appear to be pastors. These four are the ones suing the city. However when it issued its subpoena, the city demanded five people who are not part of the lawsuit turn over their sermons and other documents as well: Ms. Magda Hermida and Pastors Hernan Castano, Khan Huynh, Steve Riggle, and David Welch.

Why would the city try to subpoena documents from people who are not suing the city? As far as I can tell, the only connection these five individuals have to the case is they opposed the ordinance at the center of the lawsuit.

Imagine if you and a friend both oppose a bill proposed at the Arkansas Legislature; the Arkansas Legislature passes the bill despite your opposition, and your friend decides he wants to sue the State of Arkansas to try to have the law stricken from the books; but when the lawsuit comes up in court, the State of Arkansas demands you reveal everything you did to oppose the law and why. Your friend is the one suing the state; the state’s law is on trial. You have nothing to do with the case, but the state decides it wants to drag you along for the ride anyway. It’s unthinkable.

Alliance Defending Freedom has filed a motion to have the subpoena dismissed. In the motion, ADF writes,

“The message is clear: oppose the decisions of city government, and drown in unwarranted, burdensome discovery requests.

“These requests, if allowed, will have a chilling effect on future citizens who might consider circulating referendum petitions because they are dissatisfied with ordinances passed by the City Council. Not only will the Nonparty Pastors be harmed if these discovery requests are allowed, but the People will suffer as well. The referendum process will become toxic and the People will be deprived of an important check on city government provided them by the Charter.”

To put it simply: Government officials should not hijack the judicial process to go after citizens exercising their legal right to support or oppose a city ordinance.

Click Here to Read ADF’s Motion to have Subpoena Dismissed.