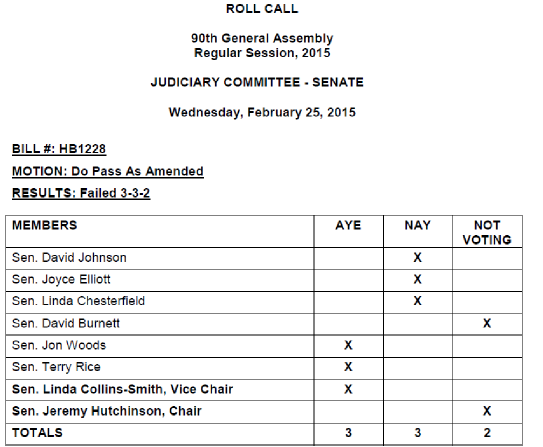 A few people have been asking how each senator on the Senate Judiciary Committee voted on House Bill 1228 (the religious freedom bill) yesterday.

The bill failed, with 3 senators voting for it; 3 voting against it; and 2 not voting. In order to make it out of committee, the bill needs 5 votes.

Here is a breakdown of the vote:

Senators Who Voted FOR The Bill

Senators Who Voted AGAINST The Bill

Senators Who DID NOT Vote For or Against the Bill

This bill can still be brought back up for a vote. Be sure to call your senator at (501) 682-2902, and ask him or her to support the religious freedom bill. You can also call Governor Hutchinson’s office at (501) 682-2345 and leave a message encouraging him to support the bill.