The Quapaw Tribe of Oklahoma has applied with the U.S. Department of Interior’s Bureau of Indian Affairs to have a 160-acre plot of land near the Little Rock Port Authority placed in a trust by the United States for tribal use, according to various news sources.

The Quapaw Tribe has owned the land for about two years. Its application with the Bureau of Indian Affairs would change the designation of the land and significantly affect local regulation and control of the property.

The laws and regulations are a little difficult to navigate, but under federal law, tribes may conduct gambling operations on many of these tribal lands held in trust by the federal government.

Typically, the first thing a tribe must do is acquire the land–which the Quapaw Tribe of Oklahoma did a couple of years ago.

Next they must move the land into federal trust; that’s what the Quapaw Tribe is applying to do right now. Based on our research, this often involves making a case for the land’s historical connection to the tribe.

Finally, once the land has been moved into the trust of the federal government, a tribe may lobby the state legislature to approve a tribal-state compact authorizing casino gambling on the tribal land. Federal law makes it difficult–but certainly not impossible–for a tribe to open a casino on tribal lands acquired after 1988.

At this point, the Quapaw Tribe indicates it has not made a decision on whether the land near Little Rock would be used to build a casino. However, the tribe is working to expand its casino operations in Oklahoma into Kansas; recently it backed out of one casino deal in southeast Kansas due in part to a lawsuit. The fact that casino expansion is something the tribe appears to be working on right now certainly fuels speculation that its lands in Arkansas might be used for gambling operations down the road. 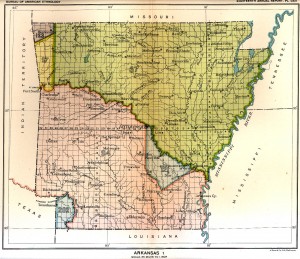 A casino in Arkansas might be a long-shot for the tribe at this point, but it does not seem to be out of the question. A little research reveals the land the tribe acquired in Pulaski County was once part of the Quapaw reservation in Arkansas, before the federal government relocated the tribe to Kansas and, subsequently, Oklahoma.

According to an 1818 treaty between the Quapaw Tribe and the United States, the original Quapaw reservation in Arkansas included parts of present-day Pulaski, Jefferson, Lincoln, Cleveland, Drew, and Desha counties. The reservation also may have included a small portion of Grant county east of present-day Sheridan.

The fact the property near Little Rock was historically part of an Indian reservation may help make the case for designating it as tribal land and authorizing Indian gaming on it.

Federal law says Indian gaming may be conducted on tribal lands acquired after 1988 if the lands are “located in a State other than Oklahoma and are within the Indian tribe’s last recognized reservation within the State or States within which such Indian tribe is presently located.” Federal law also contains other provisions and exceptions that may permit a casino on the property, if it is placed into federal trust.

If the land is placed in federal trust as tribal land, the Quapaw Tribe might be able to conduct some gambling without the consent of the Arkansas Legislature.

Under the Indian Gaming Regulatory Act, tribes may conduct “Class I and Class II” gaming on tribal lands without a tribal-state compact.

Class I and II gaming includes:

If the Bureau of Indian Affairs decides to move the Pulaski County land owned by the Quapaw into a federal trust, the land becomes tribal land that–as far as we can tell, at least–could be used for limited gambling operations like bingo. Moreover, there’s nothing the Arkansas Legislature would be able to do about that gambling; Indian gaming is regulated largely under federal law, not state.

A bingo hall near Little Rock may not sound like a big deal to many people, but bingo operations today are much more sophisticated than they were a few years ago. Electronic bingo looks and feels more like casino gambling than ever before. Bingo has been called “the bedrock of Indian gaming.” Many consider it a springboard for full casino gambling.

Perhaps the greatest concern for many people is the loss of local control. If this land is moved into federal trust, a good deal of state and local authority over the property disappears. The state and county lose the ability to tax or zone the property. The legislature has very little ability to prevent gambling operations short of a full-scale casino on the property. Management of the land is left up to the federal government and the Quapaw Tribe.