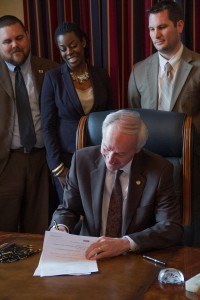 What does this law do? Is it different from H.B. 1228, the first religious freedom bill the Arkansas Legislature sent to Governor Hutchinson? Why is this law even necessary?

We have the inside scoop.

Attorneys at Alliance Defending Freedom have prepared an excellent analysis of Act 975. They compare it with H.B. 1228 and Indiana’s religious freedom law.

You can download ADF’s excellent analysis of the law here.

Summary: Act 975 of 2015, the Religious Freedom Restoration Act (RFRA), is a very strong law protecting religious liberty. It includes the same legal balancing test that is in federal RFRA, the RFRAs of 20 other states, and U.S. Supreme Court case-law dating back nearly a century. This law will protect the religious freedom of Arkansans in the same way that the other RFRAs have protected the rights of other Americans. It will protect the right of all Arkansans to live and work according to their faith by ensuring that they have a claim or defense to raise in court if the government tries to force them to violate their faith.

The History of RFRAs in America

In 1990 the U.S. Supreme Court issued its Employment Division v. Smith decision effectively changing the definition of “the free exercise of religion” and undermining the protections afforded religious liberty. In response, Congress almost unanimously passed the federal Religious Freedom Restoration Act restoring those protections under federal law, and twenty states passed laws restoring those protections under state law. These laws reinstate the “compelling interest” test used to protect religious liberty from government infringement: The government may only infringe a person’s free exercise of religion if the infringement is necessary for a compelling governmental interest—such as enforcing criminal law—and carried out in the least burdensome manner possible. This is the same test used to protect other constitutional liberties from government infringement.

Synopsis: The Arkansas General Assembly passed H.B. 1228 before finally passing Act 975. While H.B. 1228 contained greater clarity and made explicit in certain provisions what is implicit in Act 975, the legal test in Act 975 is the same legal test that H.B. 1228 (and all other similar laws around the country) had to protect religious freedom. The substance of both bills is virtually the same.