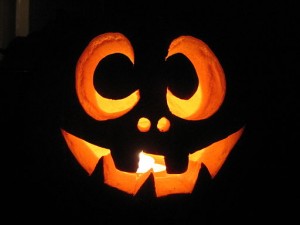 Recently we published a blog post asking “Why is There No ‘War on Halloween’?”

The post has turned out to be very popular, and I thought it would be fitting to follow it up with another more general question: What’s up with Halloween these days?

What’s Up With Halloween?

I’m not interested in bashing Halloween itself, per se, with this blog post. Many Christians consider Halloween an overtly satanic holiday; that’s a topic I would just as soon save for another day. I’m more interested in looking at what Halloween has become these past few years–and what it says about us as Americans.

Anyone who has lived more than a couple of decades would probably agree it goes without saying Halloween decorations and costumes have become increasingly ghoulish and gory. What was once largely a holiday centered around kids going door-to-door in white sheets with holes cut in them, asking for candy, has become something much more.

I have to believe the increasingly ghoulish and gory aspects of Halloween celebrations are evidence of the coarsening of our society. A werewolf alone is not shocking or scary enough anymore; we need something more violent or more disgusting to make an impression in our numb minds.

A Search for the Spiritual

I also have to believe the way Halloween is celebrated in America these days may reflect a cultural yearning for something spiritual.

As Christians, we believe human beings are at once physical and spiritual creatures. As a result, people cannot be satisfied by material things alone; we need something spiritual in our lives.

I would not suggest that everyone who puts on a costume, goes to a Halloween party, hands out candy, or carves a pumpkin is doing so because they are secretly searching for something spiritual. In fact, I doubt many of the people who go all-out putting Halloween decorations on their lawns actually believe in ghosts. But I have to believe it’s more than coincidence that as materialism has advanced in America, Halloween’s otherworldly elements have become more pronounced. To me it, suggests many Americans are trying to put something spiritual in their lives.

It could be that, for many people, Halloween offers their only opportunity to dabble with anything remotely supernatural. And just like a person on a diet might long for the taste of cake, Halloween gives people yearning for something spiritual deep inside a “taste” of what they’re looking for.

How Can Christians Respond?

As I said, I am not going to weigh in on whether or not Christians ought to celebrate Halloween. But there’s no doubt Halloween is celebrated differently today than it was even a decade ago, and as Christians, we are in a unique position this time of year.

Only Jesus can bring the spiritual satisfaction we need, and the Bible promises that God can renew a coarse mind.

Much of how Halloween is celebrated these days suggests to me that, more than ever, Americans are looking for things only Christ can give them. As followers of Christ, this gives us an opportunity to point them toward what they are seeking.