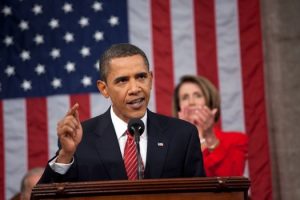 On May 13 the Obama Administration’s Education Department and Justice Department issued “guidelines” instructing public schools and most colleges and universities to let biological males who claim to be female use the women’s restrooms, locker rooms, showers, and similar facilities at school–and vice versa.

In response, today the State of Arkansas joined nine other states in suing the federal government for its overreach.

Arkansas Attorney General Leslie Rutledge today, along with nine other states, filed a lawsuit against the U.S. Department of Education, U.S. Department of Justice, and other federal agencies and officials, which last month issued a directive requiring Arkansas public schools to open gender-specific bathrooms and locker rooms to both sexes. In addition to representing the State of Arkansas, Rutledge is also representing the Arkansas Department of Human Services Division of Youth Services. The federal government’s new directive threatens the common sense policies of the Division and the important funds supporting the Division’s work.

“The Obama Administration is using intimidation tactics in an attempt to force local schools to adopt a radical social policy that raises serious safety concerns for school-age children,” said Attorney General Rutledge. “From a young age, children are taught not to be bullies, yet that is exactly what the federal government is doing by threatening the loss of funding if schools do not comply with this directive – a directive that unlawfully ignores the role of Congress. This proposal, which is part of a liberal social agenda, will disrupt the learning environment and be a detriment to the very children it intends to help, which is why today’s action is in the best interest of our students.”

The Obama Administration is attempting to rewrite Congress’s use of the term “sex” in federal law to mean “gender identity.” Current state law and federal regulations allow schools to maintain separate facilities based upon sex. The recent action by the Administration circumvents this established law by ignoring the appropriate legislative process necessary to change it. It also supersedes local school districts’ authority to address student issues on an individualized, professional and private basis.

You can read about the Obama Administration’s recent actions that prompted this lawsuit here and here.