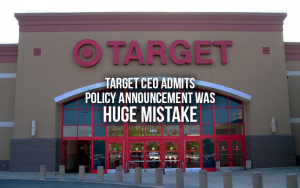 According to an article in the Wall Street Journal, Target’s CEO does not seem to regret the company’s decision to invite men into the women’s changing areas and restrooms at its stores–but he does regret the fact the policy was so widely publicized.

You may recall last year Target announced on its website that customers and employees at its stores would be able to use the changing areas and restrooms of their choice rather than their biological sex.

Many people expressed public safety concerns about this decision, and more than a million people signed agreements to boycott Target.

Target has suffered financially since. Today, the American Family Association writes, “Target’s stock has lost 35% of its value, and shuttered plans for major expansion projects.”

Of course, Target has not changed its policy as of today, and nearly 1.5 million Americans are still boycotting the retail chain as a result.