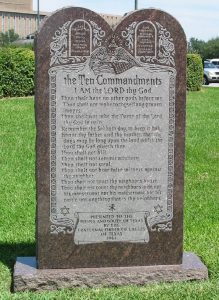 Yesterday Arkansas’ Capitol Arts and Grounds Commission approved a monument of the Ten Commandments for placement on the Capitol Building grounds.

The approval was a formality; the monument is established by a law the legislature passed in 2015.

The monument will be privately paid for. It is based on a monument ruled constitutional in Texas.

The monument celebrates the influence and legacy of the Ten Commandments in western law.

It could be placed on the Capitol grounds sometime next month.