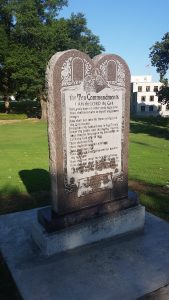 The Arkansas Legislature authorized the privately financed monument in 2015, and it was installed on the capitol grounds last year.

Unfortunately, less than 24 hours after it was placed on the lawn, a Van Buren man plowed a car into the monument, destroying it.

The new monument is a duplicate of the original, but it will be flanked by concrete barriers to prevent similar incidents in the future.

Meanwhile, the ACLU has promised to sue the state as soon as the monument is put in place — even though an identical monument was ruled constitutional in Texas some years ago.