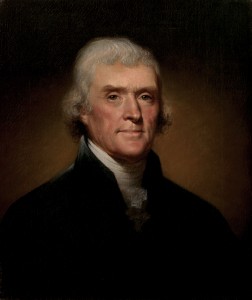 We’re counting down to Thanksgiving at our office. Today we continue our series tracing the history of Thanksgiving.

At the prompting of the Continental Congress, on November 11, 1779, Thomas Jefferson—who was governor of Virginia at the time—issued a proclamation calling on Virginians to turn to God in prayer.

The proclamation says that “it becomes us humbly to approach the throne of Almighty God, with gratitude and praise,” and sets aside December 9 as a day of public Thanksgiving and prayer. It also calls on ministers to hold church services.

First, because Thomas Jefferson is often regarded as one of the least religious of the Founding Fathers—even though he regularly attended church and read the Bible.

And second, because it is one of the earliest examples of a public official designating a day specifically for the purpose of giving thanks to God.

For more than two centuries Americans have been pausing to give thanks at this time of year. I hope you and I can continue to carry that tradition forward, teaching it to our children and grandchildren.

If you have never donated to Family Council or the Education Alliance, now is a great time to do so. Your financial support will make Arkansas a better place to live, work, and raise a family. It will promote and strengthen home schooling. It will help fight abortion and make Arkansas a more pro-life state. Click here to send a generous, tax-deductible donation today.