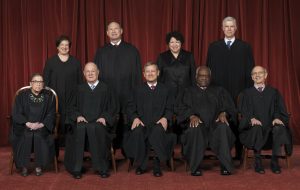 According to recent news reports, the State of Arkansas is still dealing with fallout from a bad ruling the U.S. Supreme Court issued last summer.

In June the U.S. Supreme Court ruled the State of Arkansas must list two “mothers” on a child’s birth certificate if the child’s birth mother is legally married to another woman. The ruling overturned a good decision the Arkansas Supreme Court handed down last December.

The State is currently struggling to come up with a way to amend its laws and comply with the Supreme Court’s order.

As we said last summer, the U.S. Supreme Court is asking Arkansas to ignore basic facts about biology. Birth certificates exist to record that a child was born and who the child’s biological parents are presumed to be.

As the Arkansas Supreme Court correctly noted last year, no child can have two biological mothers, but the Arkansas Department of Health is being forced to operate as if that is possible.

The U.S. Supreme Court’s ruling treats the names that appear on birth certificates like some sort of marriage benefit. Birth certificates are issued for the sake of children — not for the sake of adults. They are not simply pieces of paper. They are vital records that need to be accurate and deserve respect. We should not let them become mere political ploys in the ongoing debates about marriage.

More Evidence Marriage and Family are Good for the Economy