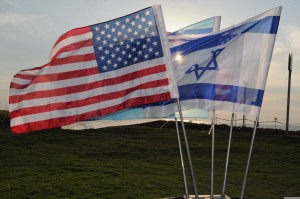 Below is a statement from our friends at the American Israel Public Affairs Committee (AIPAC) about this historic event:

Today is a historic day for the U.S.-Israel relationship. For the first time, the United States officially recognized Jerusalem as the capital of Israel.

AIPAC has always supported American recognition of Jerusalem as Israel’s undivided capital city, and we commend President Trump’s momentous announcement and decision to initiate relocating the U.S. embassy there.

This recognition is a long-overdue step to implement U.S. law. The Jerusalem Embassy Act of 1995 declared that Jerusalem “should remain an undivided city,” and “the United States Embassy in Israel should be established in Jerusalem.” AIPAC strongly supported passage of that act, which Congress overwhelmingly adopted on a bipartisan basis.

Importantly, relocating the embassy to Jerusalem does not in any way prejudge the outcome of the Israeli-Palestinian peace process, to include establishing two states for two peoples and resolving Palestinian claims to the eastern portion of the city and the disposition of holy places. Rather, this announcement acknowledges that Jerusalem will continue to be Israel’s capital as part of any conceivable final status agreement.

The Jewish people have maintained a constant presence in Jerusalem, their holiest city, for more than 3,000 years. Israel declared the city its capital following its reestablishment in 1948. When the United States ultimately relocates its embassy to Jerusalem, it will treat Israel as it does every other country with which we have diplomatic relations.

Today’s action by President Trump is an important, historic step for which we are grateful. We urge the president to quickly relocate our embassy to Israel’s capital.

You Are Invited to ‘A Night to Honor Israel’

Video: The Albert Pike Flood: A Testament to Community

For Obama Administration, 20 an Unlucky Number