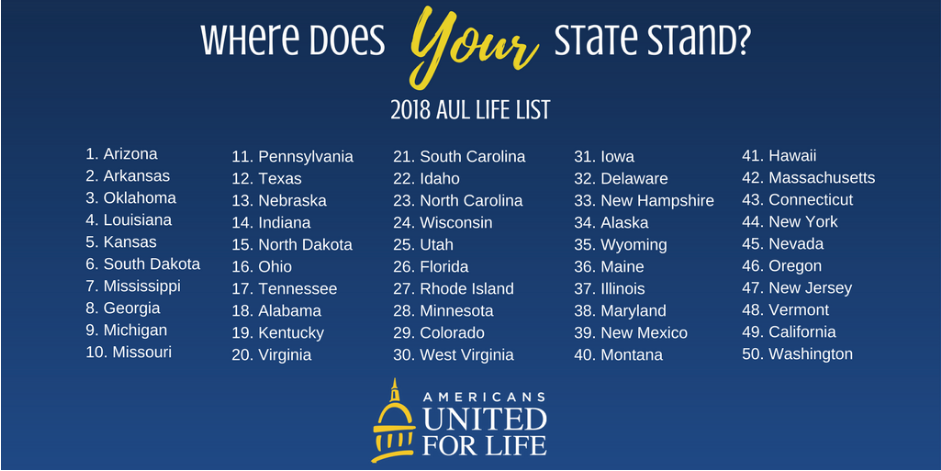 Little Rock, Ark. – On Tuesday Americans United for Life released its 2018 “Life List” ranking each state based on its laws and policies regarding human life. According to the list, Arkansas is the second most pro-life state in America, just behind Arizona.

Family Council President Jerry Cox released a statement, saying, “This is something Arkansans should be proud of. In the past Arkansas has been ranked as high as number three or number four in the nation when it comes to protecting innocent, human life. This is the best ranking we have ever received.”

The Life List ranks states based on their policies regarding abortion, assisted suicide, euthanasia, and other issues related to human life. Cox said he believes pro-life laws passed by the Arkansas Legislature in recent years are the reason the state has moved up in the rankings. “The credit goes to Governor Asa Hutchinson and the Arkansas Legislature for taking a courageous stand that protects human life in Arkansas from conception until natural death. Their hard work is paying off. We as citizens of Arkansas should be very proud of them. Last year Arkansas passed a long list of laws prohibiting or regulating certain abortion procedures and protecting women’s health. Recently the State officially quit giving Medicaid funding to abortion providers like Planned Parenthood. Arkansas also has some excellent policies in place when it comes to suicide and euthanasia. Laws and policies like these have turned Arkansas into the second most pro-life state in the country.”

Cox said he is looking forward to the day when Arkansas is the most pro-life state in America. “Abortion in Arkansas has plummeted to record lows in recent years—especially among teenagers. Public opinion polling shows most Arkansans believe abortion ought to be either completely illegal or legal only under certain circumstances. Right now the only state with better pro-life laws is Arizona. Given the circumstances, I believe Arkansas could easily become the number-one state in America when it comes to protecting, respecting, and valuing human life.”

Abortion, Public Funding On the Rise at Planned Parenthood