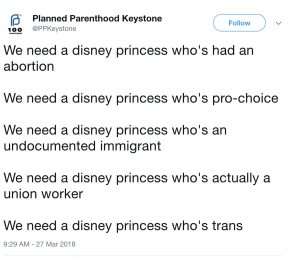 A Pennsylvania branch of Planned Parenthood posted a bizarre tweet this week calling on Disney to create an animated princess who has had an abortion.

Planned Parenthood has since deleted the post, but many people have pointed out that the tweet was incredibly ironic: Who are Disney’s biggest fans? Children. And who kills hundreds of thousands of unborn children every year? Planned Parenthood.

It all reminds me of something John Stonestreet at the Colson Center for Christian Worldview jokingly wrote last December: