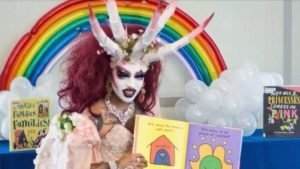 This week we learned students at the University of Arkansas Fort Smith are planning a Drag Queen Story Time event.

The announcement for the event scheduled for this coming Friday reads,

The story time is scheduled to be held at the Boreham Library on the UAFS campus.

You may recall in August the Central Arkansas Library System had scheduled a drag queen story time at one of its locations, but the event was quickly scrapped following criticism from citizens and elected officials.

Across the country, LGBT activists are working to convince libraries to host these sorts of events. As we’ve said before, these Drag Queen Story Times aren’t really about reading or fun. They’re about promoting a radical homosexual and transgender ideology.

“Bathroom Debate” Will Appear On State Ballot in Massachusetts