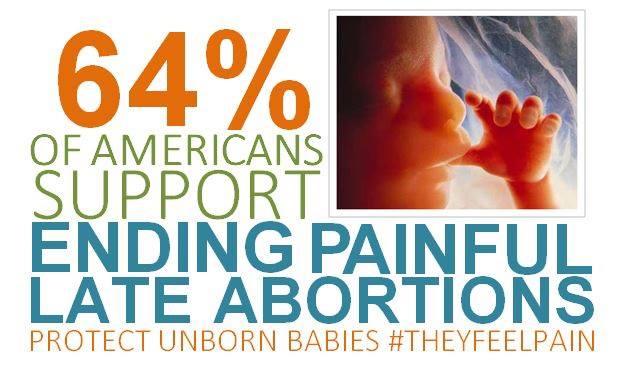 When I opened my Facebook on Tuesday I noticed a very pro-choice relative of mine posted a link mentioning abortion where she commented, “hugely disappointing!”  I knew right then there was some good news in that link, and it was then I first learned that the U.S. House had passed the Pain-Capable Unborn Child Protection Act.

While I was excited and proud of the U.S. House for making such a bold stand, I was even more proud of our Arkansas legislators for passing similar legislation earlier this year. The Arkansas law is already active thanks to an emergency clause included in the bill, and thus is already protecting future Arkansans.

In Arkansas, the Pain-Capable Unborn Child Protection Act passed a little under the media’s radar because our legislators were also busy working to protect children’s lives at 12 weeks. I am forever thankful, though, that I had the opportunity to sit in the committee rooms and hear the testimony that accompanied this bill through its passage. I will never forget it.

I sat there as mothers told about their 20-week ultrasound, when they were told their baby had downs syndrome, spina bifida, or other supposedly fatal anomalies and were given the recommendation to abort. These strong women said “no” and then went on to tell how their child who would supposedly never walk got braces and is now walking. One was told her baby wouldn’t live for more than 12 hours, and while her daughter has many medical issues, she is still alive and has enriched her mother’s life and the lives of those around her immensely.

“The problem is that the 20 week abortion ban – never mind the highly suspect science behind it, never mind that the vast majority of abortions past 20 weeks are because the fetus has fatal birth defects – IS passing in multiple states. While this is a symbolic move right now on the federal level, this ban and other restrictive laws are all too real.”

First, I think of those committee rooms. I picture the photos shared of little girls and boys who doctors said had “fatal birth defects” and their lives should be ended. Then, I see the little boy I learned of recently whose mother was told to abort him because he was seriously deformed and something was very wrong. He doesn’t quite look like other little boys, but he still has changed his parents’ lives for the better and has given his parents the opportunity to share the love of God with those around them.

Then, I swell up with pride that I live in one of those states that “IS passing” this so-called “restrictive law” that is protecting the lives of the least of these.

Come to a Pro-Life Rally Next Week!