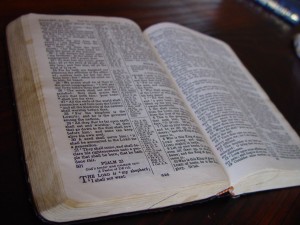 A government official in Florida has told an outreach ministry, Christian Service Center (CSC), that serves the poor it can no longer distribute USDA food the government allocates for private charities—unless, of course, the ministry agrees to take down its portraits of Christ, hide its copy of the Ten Commandments, and remove a banner that reads, “Jesus is Lord.” The ministry also has to stop handing out Bibles, quit offering to pray with the needy, and agree not to refer people to its chapel.

Basically, this ministry—which previously had been given USDA food by the government to distribute to the poor—was told in the future it could distribute food only if it did so without mention of religion.

There are two obvious problems here:

The people who run Christian Service Center say they were told the new rules in Florida are “a matter of separation of church and state.” The idea is if the government aids a food pantry that also engages in religious activity, that might somehow be misconstrued as the government supporting a religion, albeit indirectly.

Of course the government denies it is supporting abortion when it gives public dollars to abortion-providers like Planned Parenthood. When that happens, the government assures everyone it is only aiding activities other than abortion, and is not violating any laws against public funding of abortion.

Never mind that the assistance abortionists receive might indirectly cover the cost of abortion by allowing them to, for instance, maintain staff or cover their overhead expenses.