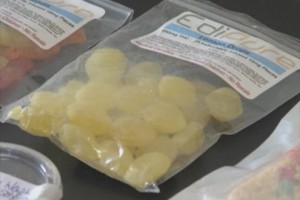 The candy resembled lemon drops, gummy bears, and mints. According to Missouri news, John Luckey with the Task Force said that they found no one living at the Pineville address. The bags of candy show how much THC is in each piece, and Luckey says the marijuana-candy so closely resembles regular candy it would be easy for a child to put it in a Ziploc bag and carry it to school without anyone knowing the difference.

Just across the border in Oklahoma, Wyandotte Superintendent Troy Gray sent out a mass message to his school district and area school superintendents about the candy. With Halloween not being very far away, Gray is concerned.

“We just need to educate our parents and staff,” he said. “Especially with Halloween coming up pretty quick Maybe this is a good opportunity for parents to sit down and visit with their kids…When you’re talking about gummy bears, lemon drops, brownies, and stuff like that, I mean those are things that you may have just overlooked and thought it was no big deal, before.”

Some of Arkansas’ “medial” marijuana proposals would allow children with a doctor’s note to use marijuana. How will schools deal with a 7th grader who shows up at school with a bag of “marijuana lemon drops” in one hand and a note from some unethical doctor in the other hand? How will school officials know if those gummy bears changing hands on the playground are laced with marijuana?

Laughable? Yes. Something parents should be concerned about? Unfortunately, yes.

Here are links to the news articles on marijuana laced candy:

Number of Deaths Caused by Marijuana Much More than 0