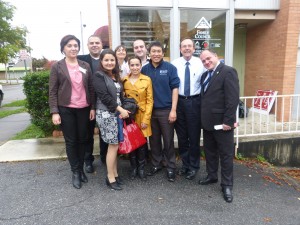 A delegation from the Republic of Georgia visited Family Council on Thursday.

Family Council President Jerry Cox and Government Affairs Director Ken Yang spoke to the group about current issues such as abortion, same-sex marriage, and the attack on religious liberty in the U.S.

The members of the delegation appeared to be supportive of traditional marriage and pro-life. Jerry showed the group two framed letters from the wall of his office. The first was a personal letter from Bill Clinton in which he, as governor, promised to sign a pro-life bill Jerry had lobbied for. The other was a 1985 letter from President Ronald Reagan commending the pro-life work being done by Rob Shafer, Kevin McCray, Jerry, and others. The members of the delegation were visibly impressed by the Reagan letter.