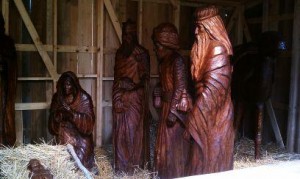 According to the Associated Press, the Freedom From Religion Foundation is hanging a banner in the Florida State Capitol depicting Benjamin Franklin, Thomas Jefferson, James Madison, and the Statue of Liberty gathered around a manger containing the Bill of Rights. The banner will read, “Let us also honor the birth of our Bill of Rights, which reminds us there can be no freedom OF religion without having freedom FROM religion in government.”

The banner is part of an effort by the Freedom From Religion Foundation to “counter” nativity scenes on public property. The group has placed signs at state capitols in Illinois and Wisconsin stating there are no gods, no Heaven, and no Hell.

Of course, atheists in Arkansas have set up what many have dubbed a shrine to paganism next to the Nativity scene on the Capitol lawn the past few years.

State capitols are adorned with Christmas lights, Christmas wreaths, and Christmas ornaments because our state and federal governments honor Christmas, and Christmas in America has always been a celebration marking the birth of Jesus Christ as told in the Bible. That means a Nativity scene is entirely appropriate; it depicts what Christmas means in this country. The public forum the state is establishing is limited to things pertaining to Christmas.

A banner worshiping the Bill of Rights; a sign declaring definitively there are no divine beings or eternal resting places; and a four-sided structure honoring paganism, atheism, and evolution (i.e. Arkansas’ atheist display) have nothing to do with Christmas, and are completely out of place among all the Christmas decorations. They don’t honor an official holiday; they detract from it.

In a season marked by celebrations of peace and goodwill, unnecessary displays like these bring division and animosity.

City Refuses to Remove Nativity Scene Despite Threats from Atheists