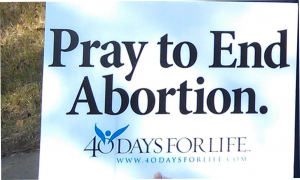 40 Days for Life is underway right now in Little Rock and Fayetteville!

This is a great opportunity for pro-life Arkansans to join together in peaceful prayer that abortion will end. From now through Easter Sunday, prayer vigils will take place outside the abortion clinic in Little Rock and the chemical abortion facility in Fayetteville.

40 Days for Life takes place each spring and fall. It is a nationwide movement that has been credited with closing abortion clinics across the country, and it has helped many clinic workers leave the abortion industry.

I hope you will join us for prayer.

To find out about the Little Rock vigils, click here.

To find out about the Fayetteville vigils, click here.

END_OF_DOCUMENT_TOKEN_TO_BE_REPLACED

40 Days for Life Kicks Off in Little Rock Next Weekend 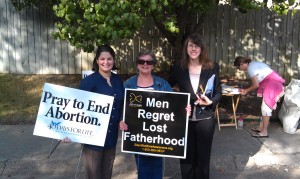 It’s almost time, once again, for 40 Days for Life.

40 Days for Life is a series of prayer vigils across America. Starting March 5, pro-lifers around the country will gather to pray peacefully outside abortion clinics. 40 Days for Life has been credited with saving unborn babies from abortion, helping abortion clinic employees leave the abortion industry, and leading many people to Christ.

40 Days for Life in Little Rock will kick off Sunday, March 2, at 3:00 p.m. at the abortion clinic located at #4 Office Park Dr. just off Financial Parkway in west Little Rock. Steve Karlen from the National 40 Days for Life Campaign will be the keynote speaker.

I strongly encourage you to bring members of your church or Sunday school class to this event on March 2, and be sure to come out at some point between Wednesday, March 5, and Easter Sunday to pray that abortion will end.

For more information on 40 Days for Life in Little Rock, click here.

END_OF_DOCUMENT_TOKEN_TO_BE_REPLACED

Abortion Decline the Result of Contraceptive Use? Not So Fast.

We decided to test that hypothesis by looking at the abortion and birth rates for Arkansas. The results are not as simple as Guttmacher would have us believe. END_OF_DOCUMENT_TOKEN_TO_BE_REPLACED