Video: Charisse Dean Talks About Arkansas History on This Day

Family Council’s Charisse Dean discusses some of Arkansas’ first African-American officials elected to office and the ways in which Family Council is continuing to help Arkansans serve their state.

END_OF_DOCUMENT_TOKEN_TO_BE_REPLACED 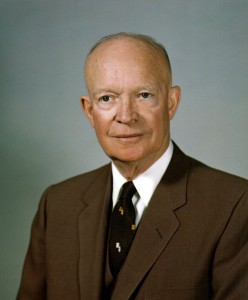 Today marks Veterans Day, a day when we remember those who have served our nation and defended freedom.

In celebration of this day, we would like to share President Dwight D. Eisenhower’s Veterans Day proclamation issued in 1954.

BY THE PRESIDENT OF THE UNITED STATES OF AMERICA

WHEREAS it has long been our custom to commemorate November 11, the anniversary of the ending of World War I, by paying tribute to the heroes of that tragic struggle and by rededicating ourselves to the cause of peace; and

WHEREAS in the intervening years the United States has been involved in two other great military conflicts, which have added millions of veterans living and dead to the honor rolls of this Nation; and

WHEREAS the Congress passed a concurrent resolution on June 4, 1928 (44 Stat. 1962), calling for the observance of November 11 with appropriate ceremonies, and later provided in an act approved May 13, 1938 (52 Stat. 351), that the eleventh of November should be a legal holiday and should be known as Armistice Day; and

WHEREAS in order to expand the significance of that commemoration and in order that a grateful nation might pay appropriate homage to the veterans of all its wars who have contributed so much to the preservation of this Nation, the Congress, by an act approved June 1, 1954 (68 Stat. 168), changed the name of the holiday to Veterans Day;

NOW, THEREFORE, I, DWIGHT D. EISENHOWER, President of the United States of America, do hereby call upon all of our citizens to observe Thursday, November 11, 1954, as Veterans Day.  On that day let us solemnly remember the sacrifices of all those who fought so valiantly, on the seas, in the air, and on foreign shores, to preserve our heritage of freedom, and let us reconsecrate ourselves to the task of promoting and enduring peace so that their efforts shall not have been in vain.  I also direct the appropriate officials of the Government to arrange for the display of the flag of the United States on all public buildings on Veterans Day.

In order to insure proper and widespread observance of this anniversary, all veterans, all veterans’ organizations, and the entire citizenry will wish to join hands in the common purpose.  Toward this end, I am designating the Administrator of Veterans’ Affairs as Chairman of a Veterans Day National Committee, which shall include such other persons as the Chairman may select, and which will coordinate at the national level necessary planning for the observance.  I am also requesting the heads of all departments and agencies of the Executive branch of the Government to assist the National Committee in every way possible.

IN WITNESS THEREOF, I have hereunto set my hand and cause the Seal of the United States of America to be affixed.

DONE at the City of Washington this eighth day of October in the year of our Lord nineteen hundred and fifty-four, and of the Independence of the United States of America the one hundred and seventy-ninth.

END_OF_DOCUMENT_TOKEN_TO_BE_REPLACED

The Magna Carta and Religious Liberty

Today is the 800th anniversary of the signing of the Magna Carta–considered by many to be the founding document of the concept of the rule of law. But an important aspect of the document’s history is being overlooked: The role the church played in its drafting.

“With the disagreement threatening to turn into a civil war, the Archbishop of Canterbury, working as an intermediary between the King [of England] and the barons, helped to draft a proposed charter that would settle the dispute. . . .

“Since then, virtually every opponent of despotism and tyranny in the English-speaking world has drawn inspiration from the Magna Carta, which declared, ‘To no one will we sell, to no one will we deny or delay, right or justice.’ When the Founding Fathers complained about ‘taxation without representation,’ they were appealing to the Magna Carta.”

Listen to Metaxas’ full commentary below to learn more about this document and what it has to do with liberty today.